And onward the Skeleton Army marches -
to the beat of Kett
KETT'S HORSE
An anarchic hobby horse for Norwich, stabled in the North East of the city & celebrating the rebellious history of the area.
In its current form it is an amalgamation of events and traditions of the groups involved, some dating back to the early 19th century and possibly before. The style of the hobby horse procession today is a mixture of three local customs:

Kett’s Riding – from Kett’s Heights (or possibly Kett’s Cave; now a children’s play area behind Silver Road) across Bishops Gate to Magdalen Gate (known as the hanging gate). This was the equivalent to a beating-of-the-bounds.

A procession for Alms that took place from the Fair between Stump Cross and Tombland through the Magdalen Gate to the Lazar house (now further out and a day centre on Sprowston Road).

The Guild of The Glad Man Ribboners who operated into the 19th Century before being resurrected in the 1930's and again in 2004. A mutual benevolence society to distribute dole at Christmas especially to those outside of church or workhouse. Traditionally dressed in gold ribbons and leading a horse to deliver food (usually black and/or Christmas puddings) and an anti-clerical sermon, they overlapped with Jack Valentine on at least one occasion.

In the 1200s when the Priors men attacked our fair at Tombland we were there. When the city upped and burned their gates, burned their priory, half did the Cathedral, chased off the churchmen we were there too. The King fined us, drew us, hung us and burnt us; when the Pope excommunicated the whole city we began our dance.

In the 1300s down in London, with Tyler, Ball and Ferrour, they shook the walls and took the Archbishop’s head for setting the hated poll tax. Here we hurlied and burlied behind our JOHN LITESTER, rocking the churches and lords until the Battling Bishop of Norwich stopped our tune at the battle of North Walsham Stump Cross. Never trust a King or the London Mayor.

In the 1400s with the Cathedral nearly repaired and the Church still imposing its harsh dues, we danced out and attacked it again and barred the city to the King’s men. Led by our GLAD MAN we rode out with our horse dressed in tinsel. We had a merry old time. 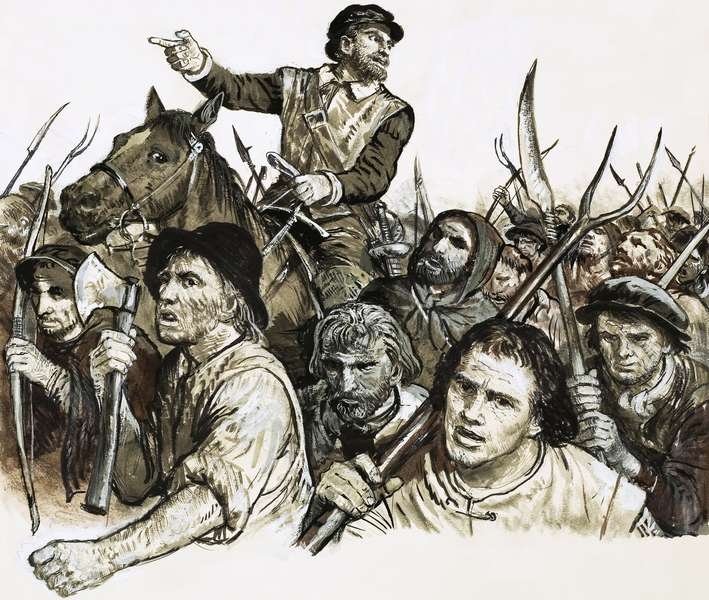 In the 1500s when the lords took our land we came from the hundreds of Norfolk and the back streets of Norwich to join Kett’s Army. We rested on Mousehold Heath, we danced across Bishops Bridge, we fought in our Norwich Streets and saw off the King’s men until the Earl of Warwick routed us and hung Kett in a tree and on Magdalen gate. Some waited for his return from France. We called our horse KETT’S HORSE and continued his dance.

In the 1600s when the King lost his head our ‘sacrilegious and profane procession’ turned over the Cathedral, chucked out the memories of the great and good and used it for our ale house. Then the Puritans, all puritanical, tried to stop our fun and our 'immoderate campings and dancing'.
In the 1700s we were hungry. Across the country people rioted for food and ran off with the grain. In Norwich we tipped the grain in the river, Nobbs the butter chucker threw butter at the magistrates and we caroused with our flags and horns demanding beer. We broke open the prison and ransacked the house of the bullying farmer who had tried to stop our gleaning. We nursed our hangover on the gallows.

In the 1800s it was the time of Swing and we played our rough music as we followed the Captain. Breaking machines, burning ricks, demanding fair wage and no tithe - from rich farmer, parson and squire and that Damnable Dean of Norwich. The High Sherriff and the Norfolk Hunt hunted us down and we still remember this: they will have the old dance of Swing.

In the 1900s they tried The Poll Tax again. Down in London they shook the city. Here we shook the City Hall as we danced into their chambers, threw their records down and did the job again.

(Some claim the horse arrived with the Vikings and fire in Magdalen Street – we can only say we don’t remember that.)